Tarpons, otherwise known as the Silver King, are considered to be one of the most prestigious and challenging gamefish to target in the Tampa Bay area, and for good reasons. Continue reading to learn expert tips for you to have a successful Tarpon fishing season.

With Tarpon fishing season in full swing, you need to be prepared for your next catch. Tarpons are large powerful fish that can perform acrobatic leaps out of the water, make far runs, and go toe-to-toe with some of the heaviest tackle. Here are some tips and tricks for targeting Tarpon. 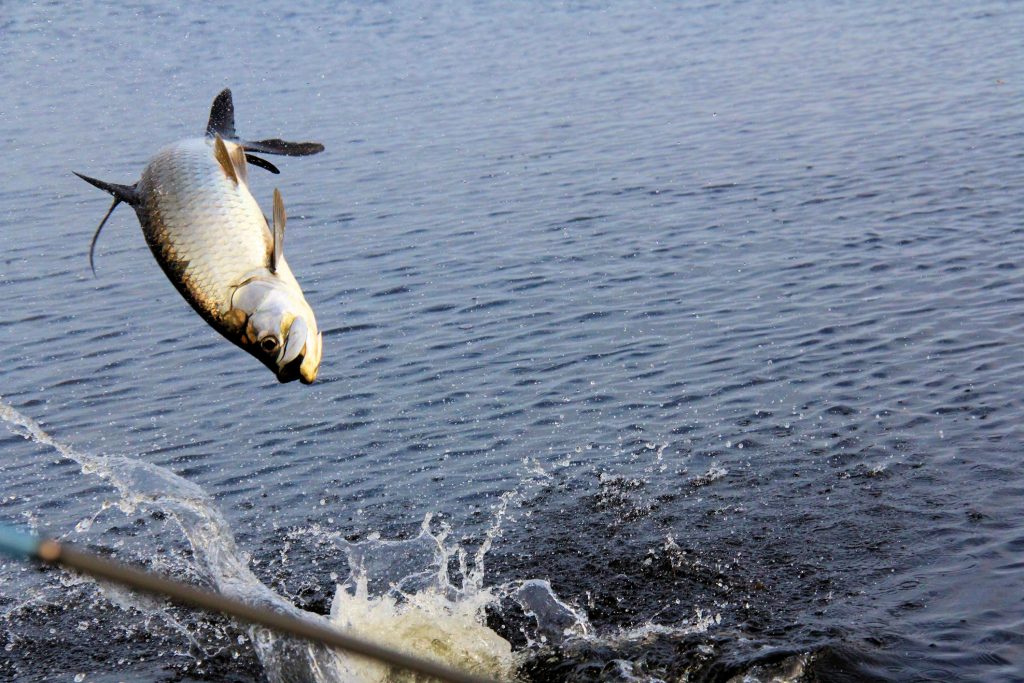 10 Tips for this Tarpon Fishing Season:

Since large Tarpons are a migratory species, they spend their springs and summers moving up the coast to the warm waters of Florida. Tarpons are normally present along Florida’s coast from April to August, but the peak, prime time to target them is in May and June. During these peak months, it’s common to see hundreds, if not thousands, of fish off our gulf coast beaches.

While fully grown, large Tarpon can be mostly found on our waters from April to August, juvenile Tarpon, on the other hand, can be found year-round. These younger Tarpons can range from 5 to 40 pounds and can be seen in residential ponds, canals, backwaters, river mouths, and open bays. If you live near a body of water, take a look now and then to see a juvenile Tarpon.

Tarpon can typically be found moving parallel to the beaches, either traveling in a northern or southern line. Because of this, it can make it quite easy to see their large bodies over the white sand, especially when they are in larger groups. A good position for fishing Tarpon would be a sandbar or channel edge. This way you can get a better grasp on the contours as a guide to the Tarpon’s swimming patterns.

Another tip during this year’s Tarpon fishing season is to know which way they are traveling. The experts like to refer to large groups of fish traveling together as “rolling fish”. Did you know Tarpon have the special ability to breathe air due to their air bladder? By paying attention to the rolling fish and noticing some gulping for air from the surface, you will have a better idea of their traveling direction.

Large, mature Tarpon migrate around the gulf in a counter-clockwise rotation. One of the best places for fishing Tarpon is in areas that hold large amounts of bait. The current will help your odds of seeing a Tarpon swim past your position too. Plus, it’s important to note that they don’t like windblown or murky water. So, we suggest taking a look at the wind charts and geography before you hit the water.

Finding the right rod and reel can make or break your Tarpon fishing season. Generally, the most popular way to target Tarpon is with a 7-8’ heavy or extra-heavy spinning rod paired with a 6000-8000 size reel. Anglers will also attempt to catch Tarpon with a fly rod in the 10-12 weight size range, with a matching reel that holds at least 250 yards of 30lb Dacron backing.

According to the experts, anglers also most commonly opt for a floating, weight-forward, fly line, with the addition of a 10-12 foot leader that has a 50-60 pound bite tippet. The color of your flies matters too. The most popular flies for Tarpon are black, purple, chartreuse, and tan, tied on hooks ranging from 1/0-3/0. Use light and bright colors in high visibility during the morning and day. Use dark colors in the evening, overcast, or night with little sunlight.

Since fishing Tarpon is challenging for all, we suggest using a rod and a reel that is actually intended to land a 100+ lbs. fish. If you use ultra-light gear on a large game fish, it prolongs the fight and stresses the fish. It’s generally not good fishing practice to use light gear during the Tarpon fishing season.

Instead, use new heavy gauge hooks and some line that’s rated for the size fish you are targeting. Be wary of your knots too. Use knots that can hold the type of pressure you plan on using on it. Unfortunately, the synch knots your grandad taught you pond fishing won’t work during Tarpon fishing season.

Think strong, sturdy, heavy-duty fishing gear for a fun and successful time. Our experts also advise using an applicable leader. Consider going heavier if you might run into infrastructure during a fight such as bridge pilings, docks, mangroves, etc. If you’re not positive about what to use, resort to the heavier option.

You can’t have a successful Tarpon fishing season without the correct bait. Consider fishing with live bait, as you are simply offering their natural forage. Mullet, shrimp, and threadfins are also useful, easy to find in our Tampa waters and Tarpons’ favorites.

When using artificial lures, swimbaits (both hard and soft body baitfish imitations), various artificial shrimp, and soft plastics are very productive as well. Essentially, you don’t have to use extra-large bait. You can use baitfish and crabs too.

Tarpons have steel-hard mouths. If you try to trout set or just let the fish hook itself, your fights already over. Strip hard, multiple times on a fly rod. On a spinning rod, have the drag set enough so you can apply a good amount of pressure on the line. Another tip is to have the rod and three or nine o’clock not three to nine.

When it comes to pulling, pull back hard. Keep the rod tip low and to the side fighting the fish and to the opposite side of its attempted direction. In addition, keep the rod low or straight down when the fish jumps, it will, likely multiple times. Slack in the line of a jump will throw the hook. If you’re unsure of what to do, stick the rod tip low as possible or right in the water, just to be safe.

Don’t try to set a record fight time, it hurts or kills the fish. Get it in as soon as possible. Get the hook out, revive it, and don’t rush reviving it, if it’s not trying to get away from you it’s not ready. Keep a good presence of your surroundings. Don’t release a fish to a shark circling your boat.

Here at Bill Jackson’s, we can be sure to outfit you with whatever tackle you’ll need on your next encounter with these gamefish. They call them the Silver King for a reason. We wish you the best of luck with this year’s Tarpon fishing season.

If you have any questions about this article or need Tarpon fishing gear, contact us directly.