Bill Jackson began his business in the back of a garage with a ton of bleach and 500 pounds of rat poison. If that sounds bizarre and a little unbelievable, it is! They say it all began by accident.

During World War II, Mr. Jackson, a native of Atlanta and a builder at heart, was stationed at MacDill Air Force Base in Tampa. He spent a total of five years in the army and maintained that his greatest lesson was how to peel potatoes. One night, at a Big Band party on base, he met the lovely Harriet Rogers and cut in for a dance. Mrs. Jackson would later say that, at that moment, she knew she would marry him … even though he was, in her words, “the worst dancer.” 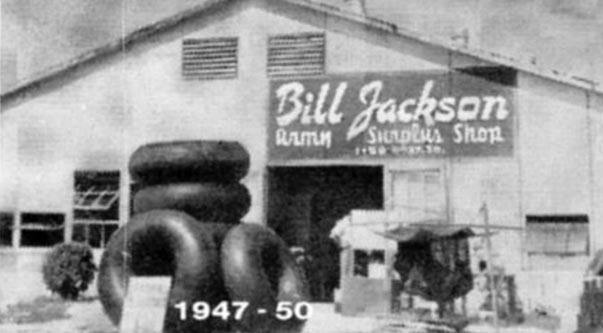 Mr. Jackson spent more than two years in England with the Eighth Air Force, then returned to Florida, and more important, to Harriet Rogers. Shortly after their marriage in 1946, Mr. Jackson attended an army surplus auction on base. He came home to his newlywed wife with 500 pounds of rat poison and a ton of bleach. Quite suddenly and perhaps by accident, the builder became a business man.

That little garage accumulated army blankets, parachutes, foot lockers, radio parts and more. The Jacksons soon realized that they would need an actual store in which to keep their goods. So in 1951, they purchased an old ramshackle building on 4th Street and 11th Avenue South, and began preparations to make their move.

Those plans hit a brick wall when the city condemned the building, but even this did not stop the Jacksons. They drew up plans, had them approved, and rebuilt the store in an unthinkable 30 days. Bill Jackson and Bud Stark, who worked at the store for 39 years, did much of the labor themselves. 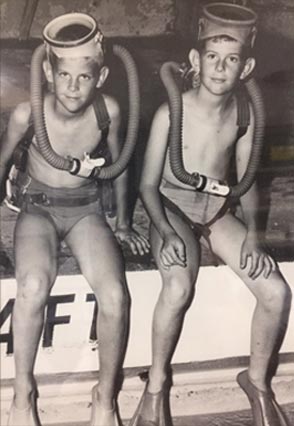 A family of two grew into a family of four, and Darry and Doug Jackson have worked at the store since they could man the registers. They stood on upside-down trash cans when they were children in order to reach the countertops. Darry even remembers his mother putting him and his brother on display in the window with the sleeping bags to amuse the customers. Now, more than 70 years later, with business degrees under their belts, Darry and Doug Jackson manage customer relations, store travels, finances, advertising and business in general.

By 1952, Bill Jackson’s had grown to include fishing tackle, camping gear and even scuba diving equipment. Then Mr. Jackson made a revolutionary decision for the future of his business: He began to teach scuba diving. There were no books available, no programs such as NAUI or PADI, and much of the gear was cobbled together. But Mr. Jackson firmly believed that it was important to teach what he sold.

The sport that we now know as scuba diving began as a military operation, and Bill Jackson was instrumental in turning that operation into a sport. He and Joe Barker, a good friend and lieutenant with the U.S. Navy, took their classes to Spa Pool in downtown St. Petersburg for training. The focus was safety first, then fun. Bill Jackson Inc. is now one of the oldest dive shops in the country.

In 1961, the Jacksons again found that they needed more room. Outdoor sporting goods completely replaced army surplus by this time, and they coined the slogan: “The Usual and the Unusual for the Great Outdoors.” The Jacksons purchased a bigger building across 4th Street and made seven major expansions to it. Then in 1968, they purchased five acres on US Highway 19, and decided to plan their “dream store.”

The building process began. The “dream store” included an indoor pool for SCUBA and kayak instruction, designed by Darry Jackson. They added a classroom, an indoor ski deck and an indoor shooting range. Most important, though, by instruction of Mrs. Jackson, the pines and palmettos were to be saved. With green stone from Wyoming, red cedar from California, and cypress from Florida, the 38,000 square-foot building reached its completion in 1976.

Through the years, the Jacksons credit much of their success to word-of-mouth networking and to their expert staff. They hire only those who have a passion for the outdoors and a great deal of knowledge about their sport. That even includes snow skiing. Their revolving ski deck has attracted flabbergasted visitors from around the globe. On any given day in the ski shop, you can hear someone say, “Snow skiing in Florida? Are you kidding? This is some store!” And it is. It’s one of a kind.

Mr. and Mrs. Jackson passed within weeks of each other in 2014, but their presence is still felt and their passion serves as a reminder to all of us that life is challenging, surprising and fun. But mostly, it is an adventure!

Click here to view the history of our founders.