The concept of fins is very simple… Fins push water backwards. The more water you push backwards, for a given amount of effort, the more you go forward. As you can see from the photo or your own experience there are a myriad of ways to push water backwards. So what is the real scoop behind the split fins and paddle fins approaches to underwater propulsion? Read on to learn paddle fins facts. 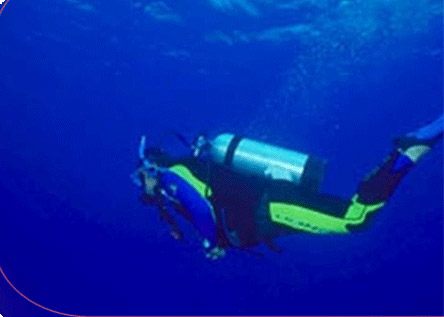 Paddle fins are a foot pocket with a contiguous plastic blade. Manufacturers will place panels of different compounds of this material across the blade to change how different areas of the blade behave when moving through the water. This behavior may involve expanding the blade out to create more surface area to push more water backwards. Other variations will change the stiffness of the blade as it moves through the water giving more power as the diver kicks harder against the fin.One manufacturer has packed many features into a paddle fin that pushes large amounts of water backwards for minimal effort. These features include power bands, stiffness adjustments and a mid-foot flex joint. With energy, the power bands are make the downward stroke.

They release their energy prior to the upstroke to provide an added boost of power. The attachment points for these power bands can be moved toward or away from the foot pocket to add or release tension on the bands. Labeled as a “Gear Shift” by the manufacturer this 3 setting adjustment customizes your speed to effort ratio to fit the specific conditions of your dive.

The attachment of the blade to the foot pocket using two Mid-foot Flex Joints. This takes the strain off of the toes and the top of the ankle. The result is use of the entire foot to power the fin rather than just the front half of the foot which provides the blade a significantly larger range of motion, often up to 5 times that of a conventional fin.

A split fin, in very simple terms, is a paddle fin with a gap running through the center from the tip to just in front of the foot pocket. This allows the two sides of the blade to assume a propeller-like configuration during the power stroke. The force of the blades against the water causes them to bend into a foil shape, which reduces the drag while increasing the suction or lifting force of the fin. The diver is more pulled the the water rather than pushed.

A manufacturer of split fins describes the action of their design as: “When using the standard traditional blade fin, with the leg completely extended, there remains an angle of 27° between the heel and the foot and the calf of the leg, causing a 10% loss of propulsion. Because the fin is angled below the body, during the kick phase, the body is pushed forward and down, instead of straight ahead.

With the SF-15 fin, that 27° angle has been designed into the fin. This means that 100% of the energy expended during the kick phase is directed toward the propulsion of the diver. To achieve maximum performance from this fin, use a small bent-knee kick with a light rhythm. This creates less strain on the leg muscles compared with traditional fins, reducing the diver’s fatigue and subsequent air consumption.”

Lastly, as you can tell there is a broad range of theory that goes into the design of modern fins. Whether you choose a paddle fin or a blade fin today’s designs offer a lighter, more efficient and comfortable experience. These fin facts are well above the offerings of decades past.

Contact us if you want to start your outdoor adventure!