If you’re looking for a new way to challenge your body, burn calories and relieve some stress, then perhaps climbing is an activity you should explore. Rock climbing has become increasingly popular over the years, especially since you don’t have to live in the mountain states to participate. Indoor rock climbing gyms and climbing gear are quite easy to come by, and can provide you with the same adventurous experience, minus the fresh air and sunshine.

There are different types of climbing, so you have some freedom when choosing which one is best for you, unless of course you want to try them all. Whichever kind of climbing you choose, Bill Jackson’s has the climbing gear for you to safely enjoy this exciting sport.

Bouldering is a discipline that involves climbing on rocks, boulders, or other surfaces without the use of a safety harness or rope. Bouldering is done near the ground, generally topping out at about 20 feet, so the distance of a fall is relatively short. Boulderers put a “crash pad” on the ground to prevent injury in the event of a fall. Initially, mountaineers and rope climbers chose bouldering as a way to build stamina and finger strength. Today, bouldering is enjoyed both outdoors and inside climbing gyms. Bouldering is less equipment intensive as it needs only climbing shoes, comfortable clothing, a helmet and chalk. Many people enjoy bouldering as a form of fitness and like the route problem-solving and social aspects.

Top roping is a form of climbing that incorporates a rope, harness, carabiners, helmet, shoes, webbing and a partner. The rope runs through an anchor point attached at the top of the climb to a tree, boulder, or some other solid structure. One end of the rope attaches to the climber, the other is handled by a belayer, who manages the rope as the climber goes up. In the event of a fall, the belayer uses a belay device to “brake” the fall.

In lead climbing, the first climber sets temporary anchor points, called “protection,” on the rock face as he or she ascends. The trailing climber pays the rope out and eventually follows the leader up removing those anchor points. Dynamic rope is used in this style of climbing because of the possibility that the leader will fall a substantial distance before the rope catches. The rope then stretches, slowing the momentum of the fall and protecting the leader from an abrupt stop.

Via ferrata is an Italian term meaning “iron road.” Essentially, a steel cable runs the length of the climbing route. At several points along the route the cable is affixed to the rock. Climbers link themselves to the cable with a lanyard and pair of carabiners. When an ascending climber’s carabiner reaches an attachment point on the rock, the second carabiner is clipped above that fixed point, and the lower one is unclipped. The climber can then proceed.

The most risky type of climbing. The climber does not use ropes or anchoring gear, only hands, feet, body mind and spirit. It is not for the faint of heart. 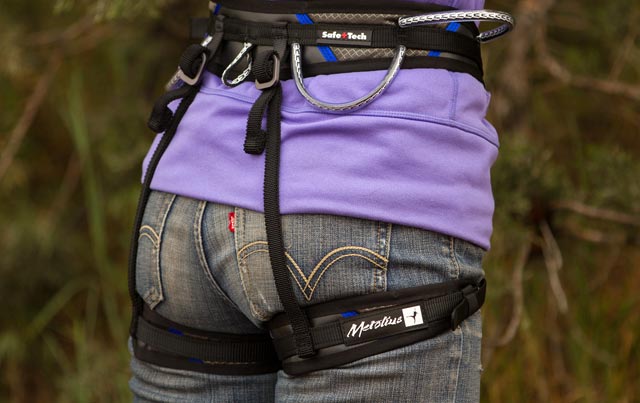 Before tackling those walls and rocks, you must be equipped with the appropriate climbing gear. Bill Jackson’s carries helmets, harnesses, ascenders, carabiners, static rope and webbing. (Sorry, no climbing shoes or clothing.) Here are additional tips to prepare for your climbing excursions:

Knowledge: Start with the help of an instructor, guide, or a friend who is an experienced climber.

Stretching: As with any other physical activity, stretching is crucial because it warms up the muscles and prevents injuries and strains.

Duration: Do not overtrain. Your body needs time to recover.

Equipment: Bill Jackson’s staff can answer any questions you might have about the sport. It is essential that you check your climbing gear regularly to make sure it is still functioning properly.

Clothing: Wear the appropriate footwear and clothing to ensure comfort and avoid injuries. Loose clothing is not ideal because it can get caught between reaches.

Come in and check out brands like:
BlueWater • Metolius • Petzl America 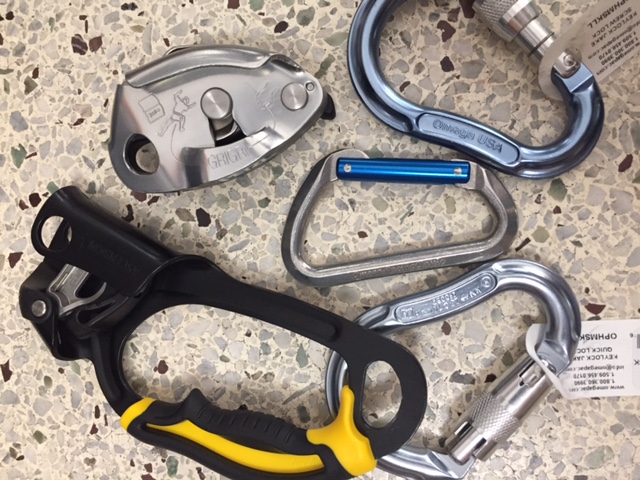